IRANIAN WOMEN IN THE UK SPEAK OUT! 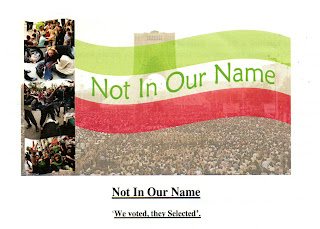 Not In Our Name
‘We voted, they Selected’.

We, a number of Iranian women from all walks of life have come together to raise our voices against the results of the 2009 presidential elections in Iran and the wave of killings, assault, arrests and detentions which ensued.

On Friday June 12th, as excitement reached fever pitch Iranians turned out in record numbers throughout the world to record their NO to the continuation of the Ahmadinejad presidency. All who voted for change were aware that all candidates were establishment’s candidates but the overwhelming desire was to put an end to the Ahmdinejad’s destructive domestic and foreign policies.

As the close of voting period was nearing Tehran and Iran’s other major cities took on the appearance of cities under siege. Plain clothed and uniformed they appeared in public keep ‘order’.
The declared results were so outrageously different to all expectations that people disregarded the warnings and poured into the streets in protest. They chanted ‘Where is my Vote?’ The candidates called the outcome a farce and a charade and lodged their official protests.

As the world has witnessed the protests have not stopped. They have spread not only to the four corners of Iran but in an unprecedented manner to wherever the Islamic Republic has a representation outside Iran.

The first arrests happened in the early hours of Saturday morning and they have not stopped. Raids at newspaper offices, student campuses and dormitories, people’s private homes and attacks against the peaceful protesters have left many dead, injured and missing.

The regime is attempting a news blackout by banning foreign press from reporting, restricting internet and mobile phone use but it had not counted on the genius of the Iranian youth who are using available technology to make the voices of their compatriots heard throughout the world.
Those of us Iranian women who have suffered for the past 30 years under the theocratic regime and deprived of our human right were the core of the recent presidential elections and denounce the coup which was carried out in our name.

We, Iranian women living in the UK denounce:

- The coup which was carried out in our name by stealing our votes
- The presence of armed men on the streets of major cities.
- The assault on people at peaceful demonstrations and students at the universities.
- Censorship and the closure of websites and other means of communications.

We demand:
- New elections with the presence of independent national and international observers.

We call upon
- human rights organisations to raise their voice against the coup in Iran.
- the peace-loving British people, whom we have lived among for decades to support us in our plight.

THIS IS AN INDEPENDENT BLOG FOR ALL IRANIAN WOMEN.

OUR EMAIL: iranianwomenuk@gmail.co.uk
PLEASE SEND US YOUR COMMENTS, NEWS, VIEWS, PHOTOS AND VIDEOS AND HELP US TO CREATE A FORUM FOR ALL IRANIAN WOMEN IN THE UK AND BEYOND.
Posted by iranianwomenuk at 1:41 AM

iranianwomenuk
A number of Iranian women from all walks of life; writers, poets, journalists contribute to this blog. e-mail: Iranianwomenuk@gmail.com